Wending my way through Ancestry.com has lead to some very interesting findings, such as the fact that my dad’s family was not English, like we’d always thought, but part of the Palatine emigration. I also discovered that Lithuanian genealogy is not for the faint of heart. At the time the Lithuanian branch of my family came over to the US, Lithuania was part of Czarist Russia, they ended up on ships leaving Germany, and many of them knew almost no English. Their Lithuanian names had been converted to Russian Cyrillic spellings, translated back into Latin spelling via German, and then translated into English once they hit Ellis Island. Needless to say, this didn’t do much for the encouragement of correct spelling of their names.

I joined a couple Lithuanian groups on Facebook to find more information. In addition to the marvelous help, I learned a lot about Lithuanian heritage, including, but not limited to, holiday celebrations, food and boozy stuff. Apparently, Lithuania is insanely cold in the winter, and like most countries where it gets insanely cold in the winter (basically, any place that gets below freezing in December and/or January), they drink a lot of booze. The one made famous by Lithuanians is a honey spice liqueur called Krupnikas. My guess is that it helped them forget how awful it is outside when it’s 37 below 0. 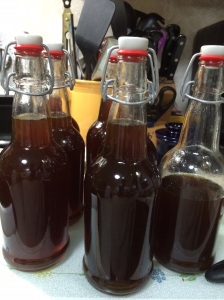 Bottles of Krupnikas ready to age.

Since it was around Christmas time, and it was insanely cold out, I thought I’d try out some Krupnikas. It was not available for sale in the state-controlled package store, mostly because the Pennsylvania Dutch are known for being German. I looked around for recipes, and quickly discovered there are as many varieties of this as there are people on the planet. Possibly more.

After much reading, researching, and some 151 rum, here’s the recipe I tried out.

¼ teaspoon ground turmeric (should use 2-inch piece sliced red or yellow ginger/turmeric root. I guessed on the powdered amount. I’m not a huge turmeric fan.)

1 teaspoon nutmeg (should use one nutmeg seed, cracked. I guessed on the powdered amount)

10 pods cardamom, lightly crushed (I had the seeds themselves instead of pods. This might not be enough cardamom as a result. But with this much Everclear, who cares?)

4 vanilla bean sticks, cut up. I love vanilla, so a few extra beans snuck into my mix.

4 pounds clover honey (go for organic if you can). Use less if you want it less sweet, although even 2 pounds of honey is still pretty darned sweet.

1.5 liters 190 proof Everclear (1 large or 2 regular size (750ml) bottles. I only found 151 proof this year. Pennsylvania apparently thinks 190 proof is too dangerous for us hoi polloi). Other grain alcohols are fine as long as they are very high alcohol content.

7 or 8 12-ounce bottles and stoppers, sterilized (I did mine in the dishwasher. You can get bigger or smaller bottles as you desire.)

Put 1.5 quarts of water into the pot. Mark where that spot is in the pot on a clean ruler or a wooden spoon. This is so when the spice water boils down by half, you can see it easily. Add the rest of the water and the spices. 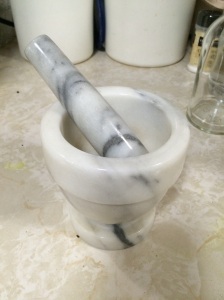 You can use a mortar and pestle to crack the spices. A food processor works even better.

You can slice up vanilla beans, but cutting them with kitchen scissors is even faster.

I wrapped mine up in a spice bag that I made from two layers of cheesecloth. Bring to a boil and simmer until it reaches your halfway mark, about an hour. If you are making a half batch, it may take less time.

The spice water with the spice bag steeping. It smelled fantastic.

Pour only the honey into another large pot (you’ll need one large enough for the honey, 1.5 quarts of spiced water, and the 1.5 liters of Everclear). Heat the honey until it boils, skimming off the foam. 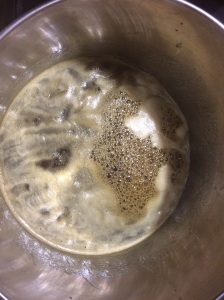 Honey boiling in a large pot.

I used a jelly foam skimmer to remove the foam. This handy device is available on Amazon and in lots of places that sell supplies for canning.

Using a jelly foam skimmer to remove the foam.

When the spiced water is done boiling down halfway, add it to the honey.

Remove the pot of honey spice water from the heat, far away from any flames to avoid starting a fire with the alcohol. Apparently, this is an area of Great Concern for many other Krupnikas creators, since this warning is repeated in large bold letters in every post. I felt it necessary to repeat it here out of wisdom and a sense of kinship with other Krupnikas makers. Don’t make the fire department come out on an insanely cold night to put out a fire caused by your inattention to this warning. 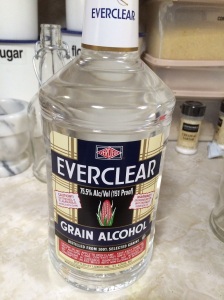 Here’s the Everclear for the Krupnikas.

Pour in the Everclear and mix well into the honey water. Pour this mix into sterilized bottles. Let it age at least two weeks. Any sediment can be strained out or filtered out through a coffee filter—wet the filter first so that the filter doesn’t absorb any more alcohol than it has to. The sediment that’s left behind can be added to a nice Krupnikas spice cake.

Here is a nice sample of newly-minted Krupnikas.

Makes about 6 to 8 of the 12-ounce bottles, depending on how much you ‘sample’ while cooking.

Having heard that Krupnikas is good for all sorts of ills, including cold viruses, I decided to test it out after aging for four months. It might need a little more time to age to an even greater smoothness, but after a few sips, I’m pretty sure it’s just fine right now. My cold is substantially less noticeable!